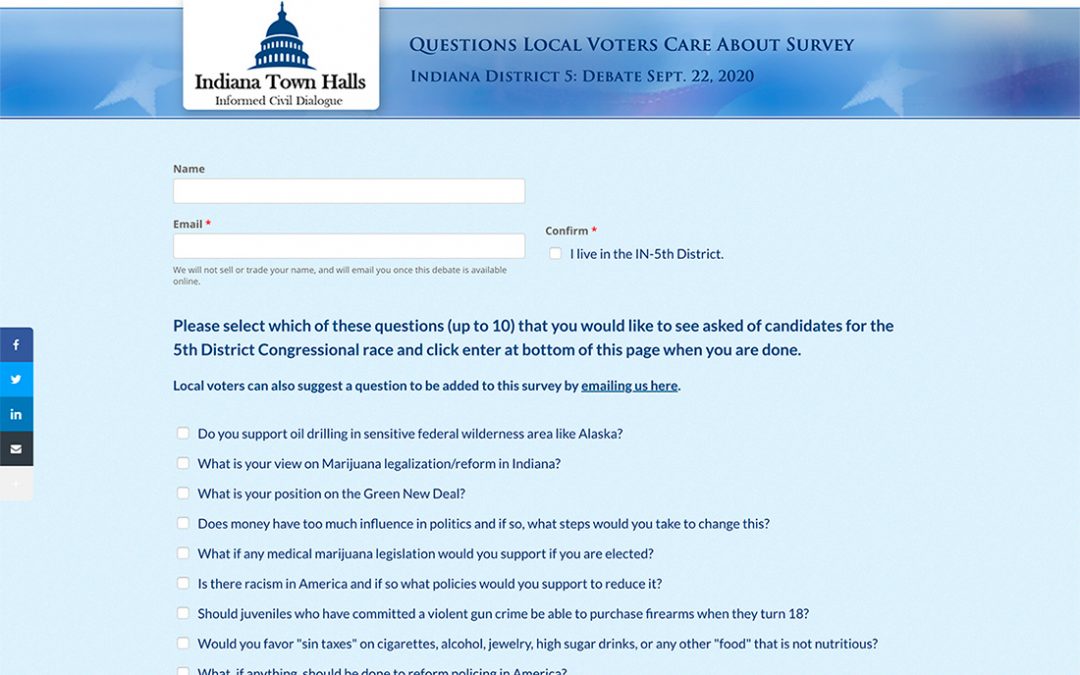 Indiana Town Halls and WFYI Productions today announced that a Fifth District Congressional Town Hall will be live streamed and broadcast on WFYI Public TV Indianapolis on Tuesday, Sept. 22, 2020 from 7 to 8 PM.

The most hotly contested Congressional race in Indiana features Democrat Christina Hale and Republican Victoria Spartz. They are pursuing an open seat created by the pending retirement of Republican Susan Brooks. Jim Shella, former political reporter for WISH-TV and former host of Indiana Week in Review on WFYI, will moderate.

The broadcast will also be live streamed with an easy to access link found at www.indianatownhalls.org This website aims to be the premier, fact-based source of non-biased information to help voters decide which candidate deserves their vote.

Within a few days after the Town Hall, an unedited recording will be available on the Candidates Video Debate website in an easy to access and share format of one- or two-minute videos of each candidate answering each question.

One of the most unique features of the Town Hall will be the use of a crowd-sourced voter Survey to enable citizens to prioritize and submit questions that moderator Shella will pose to the candidates. Fifth District citizens are encouraged to complete the Questions That Voters Care About Survey at https://candidatesvideodebate.org/indiana-5th-2020/. This Survey was created by our California-based technology partner—the non-partisan, democratizing media non-profit, Informing to Empower Democracy.

Les Zwirn, CEO of Indiana Town Halls, said the Town Hall is intended to strengthen citizens’ trust in both the election system and Congress. “Our non-partisan goal is to help voters make a better-informed decision in the upcoming election. We will do this, first, by giving local citizens, instead of pundits, the opportunity to vote on which questions are asked. And second, by making it easier for voters to compare the candidates’ responses using a non-confrontational dialogue approach,” he said.

Moderator Jim Shella observed that “Indiana Town Halls selected the Fifth District to test its technology-enhanced Town Hall concept because the race will likely be the closest in Indiana and the contest for the seat has drawn national attention. The District is traditionally Republican, but Democrat Joe Donnelly carried it in the 2018 race for U.S. Senate and the demographics are changing in ways that makes the district more competitive than it has ever been.”

Indiana State Senator John Ruckelshaus (R), one of the Indiana Town Halls founders, stressed that “our forums will give voters a non-biased look at the candidates and create a more civil tone than traditional debates. Now is the right time for our moderated, technology-enhanced Town Hall model. The public is hungry for thoughtful, interactive discussion of issues and civil exchanges with politicians.”

Indiana Town Halls, Inc. is a new, nonpartisan organization dedicated to strengthening confidence, trust and accountability in Congress and an election system perceived by many Americans to be “rigged.” Congressional candidates and citizens will come together in a civic learning atmosphere that is less contentious than traditional debates.

Our vision is to establish a statewide infrastructure for making technology-enhanced Town Halls a regular feature of election and policymaking interactions between Indiana citizens and their elected officials and candidates in each of Indiana’s nine Congressional districts.

Partners include WFYI Productions, Informing to Empower Democracy, the Mike Downs Center for Indiana Politics at Purdue University-Ft. Wayne, the Center for Urban and Regional Excellence at Indiana University—Northwest, the Indiana Citizen, and Indiana Campus Compact.

The Central Indiana Community Foundation is a founding funder. 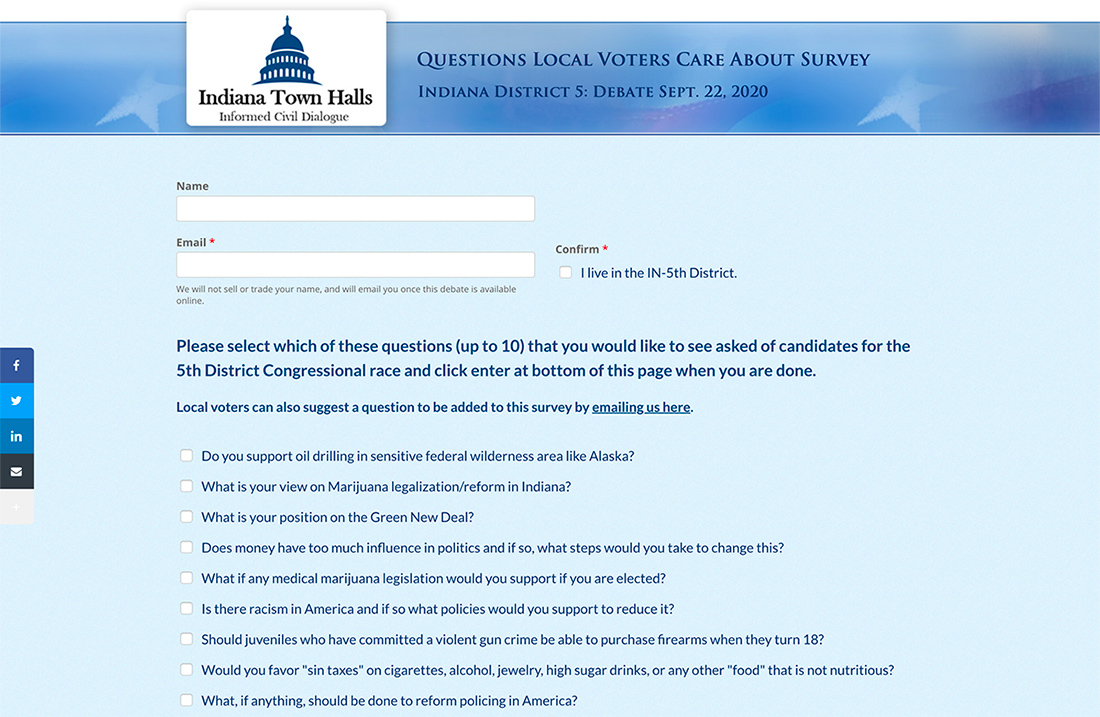